Jake*, scrolling through videos of pro-wrestlers on his phone and happily chatting, suddenly falls quiet.

“I don’t think I should move mom. It’s a whole hour away. That’s a long way,” the 19-year-old says as he leans back into the couch.

It’s the day before Jake is supposed to start a trial-stay at a residential program for young adults with special needs. Jake is nervous about this new chapter of his life. His mom, Isabel reassures him everything is going to be okay and gently reminds him how excited he has been about his new home. It has taken them both a long time and a lot of work to get to this point.

Two years ago, Isabel and her son, Jake were referred to the Partners HealthCare Pediatric Integrated Care Management Program (Pediatric iCMP). Jake has Down syndrome and a tangle of complex care needs. Care management programs like Pediatric iCMP match high-risk patients like Jake with care managers who work closely with them and their families to develop a customized health care plan, monitor patients before and after office appointments, and act as a liaison between the patient and other members of the care team.

Jeidy Fernandez, LICSW, a social worker and Kristen Reske, RN, are assigned as Jake’s pediatric iCMP care team. “We love Jake. He is so charming, very social. You can’t help but love him,” says Reske. Jake loves talking about music, basketball, and his prized Nike sneakers. He likes taking pictures and even has a channel on Youtube where he uploads short videos. It takes a little effort to get him talking, but once he does he has lots of opinions on what’s cool and what’s just okay.

Jake is one of 457 patients currently enrolled in Pediatric iCMP, with 380 more eligible patients in the process of enrollment. A misconception about “pediatric” care is that it has a hard-stop once the patient turns 18. For many children with complex conditions, it makes sense to continue care with their pediatrician well into their twenties, and even beyond. Although the Pediatric iCMP program is modeled off of the Partners Adult iCMP program, pediatric patients have very different care needs. 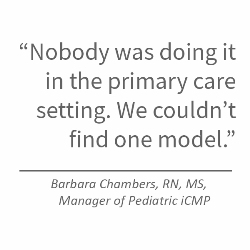 In 2012, Mark Mandell, MD, a former Medical Director for Pedi iCMP along with Barbara Chambers, RN, MS, Manager of Pediatric iCMP, started thinking about how they could apply this effective adult care management work to the high-risk pediatric population. During the initial discovery phase, they couldn’t find any other hospital or physician networks taking a similar outpatient care management approach where resources were embedded into primary care practices.

“Most of the care management for pediatrics had been done for children with advanced health care needs in hospitals or tertiary hospital programs,” says Chambers. “Nobody was doing it in the primary care setting. We couldn’t find one model.”

Without a pediatric-specific framework to build off of, the team assembled a diverse work group of administrative and clinical pediatric staff from across the Partners system to think about how to apply the adult program to a pediatric population. While adults generally have ongoing chronic issues, pediatric conditions are more acute in nature, such as premature birth. This created initial challenges identifying eligible pediatric patient candidates.

“The problem was, year-old claims data on pediatric patients wasn’t going to work. A lot happens in a child’s life in a year,” says Chambers. “Almost 90% of our initially identified patients were disqualified by doctors who said, ‘yeah, they needed care management but not anymore.’”

A year later, the team completely re-imagined how patients were identified and enrolled. Instead of working from claims data, the care managers relied on providers to identify patients. Additionally, the pediatric iCMP team also moved to a payer-blind opt-in for the full program roll out. This opened the pool of applicants from commercial-only patients to a much wider, more diverse population. The changes were, in Chambers’ words, “wildly successful.”

As the patient population was revised, the team observed the type of support needed to be tweaked too. While the team initially thought they would need nurse care managers trained in advanced pediatric care for problems like cerebral palsy, cystic fibrosis, or congenital heart defects, they began to see that the primary care support needs were behavioral and social, not necessarily medical.

Children referred to iCMP have high rates of behavioral health conditions like autism, ADHD, oppositional defiance disorder, and developmental delays. The team also sees patients with complex issues like genetic abnormalities that combine medical, educational, and community needs. In response, the iCMP team hired social workers to work alongside the nurse care managers to address the wide scope of issues.

“A lot of our work is actually with the parent,” says Fernandez, the social worker on Jake’s team. “Because these patients are so complex, a lot of the care management is helping the parent navigate the systems and learn to be advocates for their child.”

Jake was first referred to the program because his doctors were concerned his mother was not following through on his care. Once the iCMP care management team came on, they realized the problem wasn’t neglect, it was that Isabel was overburdened and overwhelmed with all of Jake’s appointments while juggling multiple jobs and another teenage son.

Jake’s Down syndrome causes developmental delays, unique nutritional needs, and increased risk for cardiac problems and certain cancers. He was diagnosed with poorly-controlled type two diabetes. Although he can be chatty and outgoing, his anxiety and depression get bad enough that he cannot leave his room, much less go outside or to school. At 5’4” and over 300 pounds, Jake is considered morbidly obese, and he has apnea so severe he audibly wheezes just sitting on the couch. Jake’s complex care team includes an endocrinologist for his diabetes, an ear nose and throat doctor (ENT) for his sleep apnea, a Down syndrome specialist, a psychiatrist, a geneticist, as well as specialists in the Massachusetts General Developmental Clinic.

To have more time to take her son to doctors’ appointments, Jake’s mom rearranged her schedule, so she has a few weekdays free during business hours. But the trade-off is there are some days she works multiple jobs nearly around the clock.

“It’s hard not being able to watch him all the time,” she says. “I got home the other night and it looked like he’d been dipping cookies in ketchup and mayonnaise as a snack in the middle of the night.”

CHANGE IS A PROCESS 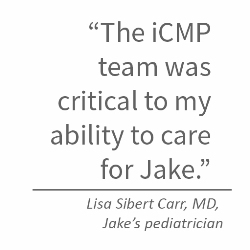 Jake’s journey has been a rollercoaster ride for his care team. But overall, they talk about Jake’s care as a success, albeit one in progress. With Fernandez and Reske as his central supports, the members of his widespread care team are all on the same page.

“The iCMP team was critical to my ability to care for Jake,” says Lisa Sibert Carr, MD, Jake’s pediatrician. “Jeidy and Kristen helped schedule and reschedule appointments in Boston, helped remind his mom of appointments, and kept all of his providers informed of difficulties and obstacles Isabel was facing caring for Jake. Perhaps most importantly, they helped coordinate his care both at MGH and in the community.”

Fernandez and Reske have been advocates for some of Jake’s more difficult problems, exploring weight loss options, securing a C-PAP machine for his sleep apnea, and arranging for a wide array of behavioral health supports from in-home services to family partners.

“We’ve engaged just about every mental health service from the MassHealth Children’s Behavioral Health Initiative (CBHI) has to offer,” says Fernandez. “iCMP has helped put those into place and worked very collaboratively with them.”

One of the biggest problems Jake’s team helped sort out was his education. When his public school would no longer accommodate him, Reske and Fernandez reached out to a pro-bono lawyer to fight for Jake’s right to city provided education until his 22nd birthday. “Not going to school for the past year and a half has really worsened his health,” explains Reske. “His depression has increased; his medical conditions have been deteriorating—we were here to help guide the family to a solution.”

For the past few months, Reske and Fernandez have helped Jake and his mom explore residential options, which would allow Jake to be more independent and live with peers his age. The funding, covered by the school system, would not have been possible had iCMP not engaged legal counsel.

Reske, who toured the residential program at Cardinal Cushing with Jake, his mom, and his brother, described the day as one full of hope and excitement. She says, “Jake may have Down syndrome, he may have medical conditions, but he’s a young adult who wants everything that other people want at his age. He wants to join the swim team because he’s a good swimmer. He said he wants friends, a girlfriend, a job. He wants all these things.”

Jake started a trial 45-day stay in at the Cardinal Cushing residential program this past January. A little over a month later, Jake is beginning to settle into his new home. According to his teachers, he does a great job of participating in classroom discussions, asking questions, and reading aloud. He is making friends and is generally open to just about whatever activity is on the schedule; even participating in gym class and swimming on Saturdays. Not only is he venturing outside his room, Jake is now walking all over campus. His increased activity has helped him lose twenty-three pounds and contributed to lower, more stabilized blood sugars. The move was a big change for both him and his mom, but overall Jake seems to be progressing in leaps and bounds.

“I don’t know what I would have done without the care managers,” says his mom, Isabel. “They’ve done so much for us. It’s such a big help for me and Jake.”

*Only first names have been used to protect the privacy of the patient and his family.